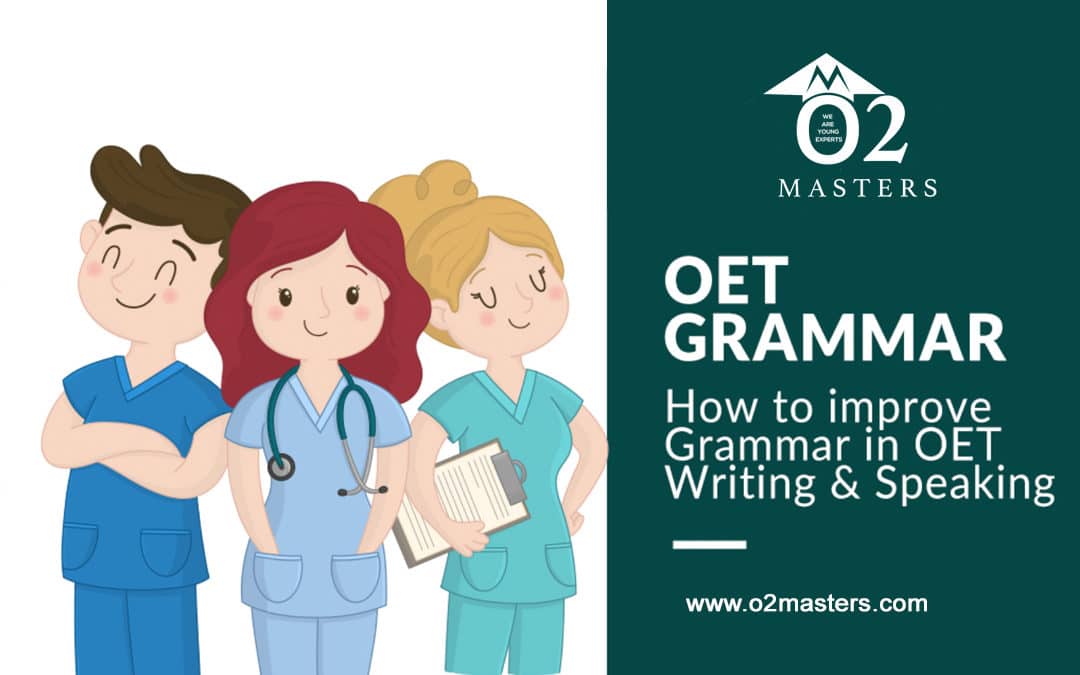 OET Grammar: How to improve OET Grammar in Writing & Speaking

The Occupational English Test(also known as OET) is the English Language test for healthcare professionals. According to Wikipedia, OET was designed in the late 1980s by Professor Tim McNamara, under the guidance of the Australian National Office for Overseas Skills Recognition (NOOSR), which administered the test at that time. List of regulatory organisations that accept OET can be seen on the official website. This exam is curated to analyse the candidate’s language proficiency of healthcare professionals who wants to practice abroad. OET Test is taken every month in more than 110 locations in around 40 countries in fields like dietetic, medicine, nursing, occupational therapy, pharmacy, podiatry, veterinary science etc. With O2 Masters, OET exam online Coaching, Score better with our Expert Team. O2 Masters ensures their students achieve an optimal score. Our Experienced Tutors help you boost your score through a combination of smart teaching and personalised teaching plans.

Most Significant aspect of OET Test is Grammar:

One of the most important aspects of the OET test is grammar.   75% of the scoring pattern in OET is based on grammar and structure of making sentences while writing and speaking. If the test takers commit more than 50% errors in grammar, he/she lose a significant amount of marks. As a thumb rule, sentences used in OET Writing & Speaking must be free from any grammatical errors. Let’s discuss Pronoun, Noun, Verb, Adverb, Adjective with special focus on verbs and helping verbs. Noun: is the name of some living creature, a place, an idea, inequality, for example, Nikita, Car, Laughter etc are nouns. Pronoun is a word which holds the capacity to function as a noun. For example He, she, they. All these can be used instead of a noun in a sentence. Adjective is a word which describes something, for example, a red t-shirt. Here, Noun t-shirt is described by the word red. It indicates the t-shirt is of the colour red. Adverb is a word which modifies the meaning of a verb, an adjective, noun. For example, walk slowly this indicates that the person is walking but it tells the capacity of a person to walk. Now, when using works, a question arises when to use “s” after work. There are simple rules: For a verb, it should be singular and second one that sentence it should be in present.

These verbs are meant to assist the main verbs. For example,  he is working, here- working is the main verb, is: Helping verb to assist the main verb. Sentence formation: Structure of sentences as in how to put words together to make them grammatical meaningful sentences. Sentence consists of 3 parts. Subject, verb, object. For example: She(Subject) plays(verb). she(Subject) likes(verb) cats(Object). Laura(subject) is(verb) verb(adjective). She(subject) works(verb) slowly(adverb). She(Subject) is(verb) my friend(Noun). Difference between Active Voice and Passive Voice:

Why online Coaching with O2 masters for OET Preparation:

– Flexible Timings (Time-saving & Money saving)  – One-on-One Interactions and get 100% attention from the tutor.  – Schedule is Planed for the student from scratch -Saving your travel time & Saving your precious time to get ready – When you join us, First class is your Consultancy – Expert Speaking Sessions/Guidances once in fortnight for your expertise. – Learn from anywhere( India, UK, Saudia Arabia, Punjab, Australia, Delhi) – Affordable Fees – Save Money, Study Online within your comfort level and polish your band score. – Learning Material  Get New Practice Materials as OET is all about practice.  – Discussion of all modules in every class  – 5 days of classes every week  – Grammar sessions if required  – Tasks are sent prior to class to attempt and discussed during the class.

O2 masters usually provide individual classes for both Academic and General Training. The main goal of O2 masters is to make a candidate enjoy learning and improve day by day. I hope we’ve answered all your queries, if any doubt, share it in the comment section below. About O2 Masters ensures no matter what your test OET, IELTS, or PTE, you achieve an optimal score. Receive guidance, personalized tips, and solutions. We help you boost your score through a combination of smart teaching and personalized teaching plans.